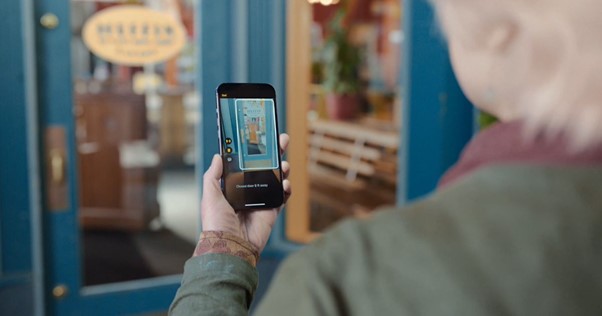 Today, May 19, is Global Accessibility Awareness Day, and Apple has announced several new accessibility features to mark the occasion. We will be speaking about these new features in one of our upcoming podcasts and list below the most relevant ones for people with sight loss.

One of the new features is called Door Detection, which Apple says can help users locate a door upon arriving at a new destination. Door Detection can help users understand how far they are from a door and describe its attributes, including whether it’s open or closed. If the door is closed, the feature can inform the user whether the door can be opened by pushing, turning a knob, or pulling a handle.

Door Detection can also read signs and symbols around the door, such as room numbers or the presence of an accessible entrance symbol. The Door Detection feature works with a combination of LiDAR, your iPhone or iPad’s camera, and machine learning. This feature is expected to available only on newer iPhones and iPads.

This one is really good; Apple is introducing a new feature to Siri called Siri Pause Time. Users can adjust how long Siri waits before responding to a request. This will help make using Siri a less frustrating experience and will help you get those messages off first time.

There is a new feature coming to the Apple Watch called Quick Actions. With Quick Actions you will be able to use a double-pinch gesture to answer or end a phone call, dismiss a notification, take a photo, play or pause media in the Now Playing app, and start, pause, or resume a workout.

According to Apple these features are set to come in software updates later this year.