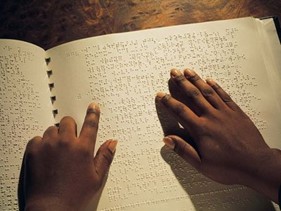 In the early half of the 19th century a young man of the name Louis Braille created a system that would change the lives of blind and visually impaired people for the rest of time. He created the braille code at the age of 15 after being inspired by a system developed by a Major in the French army and that system was called nocturnal writing, it was a tactile system that was used by French troops during the night so that they could write messages to each other without using a lamp, this though was not developed with reading and writing in mind. It was based more on the sounds of word rather than spelling and punctuation.

This system was shown at the school for the blind where Louis Braille was attending. After being shown it, he spent many months working alongside one of the teachers at the school who helped him develop and refine it to the 6 dot system we all know today! Shortly after refining the reading and writing, he also developed music notation.

Unfortunately, braille was rejected at the school he was both attending and later on teaching at. It wasn’t until many years after his death when the system would finally be seen for how vital it was for blind and visually impaired people.

And in all that time braille has changed and developed to keep pace with the Modern world.