How to Record Voice Memos on the Apple Watch 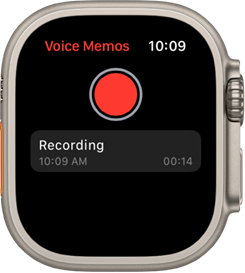 It was a normal day in the NCBI office, but all of a sudden something shook me to the core. I needed to record a voice Memo, and my iPhone wasn’t an option. Some might call this a first world problem, but to me this was a catastrophe of immaculate proportions. Then it hit me, I could use my Apple Watch. Surely it can’t be much good I thought, but it might be enough to get me through. Running out of time and options, I raised my wrist and told Siri to open Voice Memo’s and within 5 minutes I was amazed. It actually sounded good, like seriously really good.

How does it work?

When you open the voice memos app on Apple Watch you’ll find just one button labelled record. When you double tap this button recording starts, and double tapping again will stop and save your recording. It’s that simple. Saved recordings show up under the record button so you can either flick to them, or you can use crown navigation if you’ve got it enabled.

Recordings are synced with the voice Memos app on the iPhone, so if you want to use more powerful features or export to another app you can do so quite easily. The recording is really quite good, the only downside is that it’s in mono. The mono recordings are also seen on the iPhone voice memos app, but even though this might be a frustration for an audio nerd like myself it shouldn’t bother most users.

If I had one other criticism it would be that sometimes the sync with iPhone can take a while, and you’ve got to just wait for the watch to do this in its own time. Having a version of airdrop on Apple Watch might be a nice addition in a future update, but unfortunately for now you’re going to be left waiting at times.

I was really impressed by the voice memos app on Apple Watch, even if it’s not quite perfect. The recording quality is outstanding, and the app is both accessible and easy to use. The fact that syncing with iPhone takes a while is a real kicker, but the app does do what it says on the tin, and it does it well.