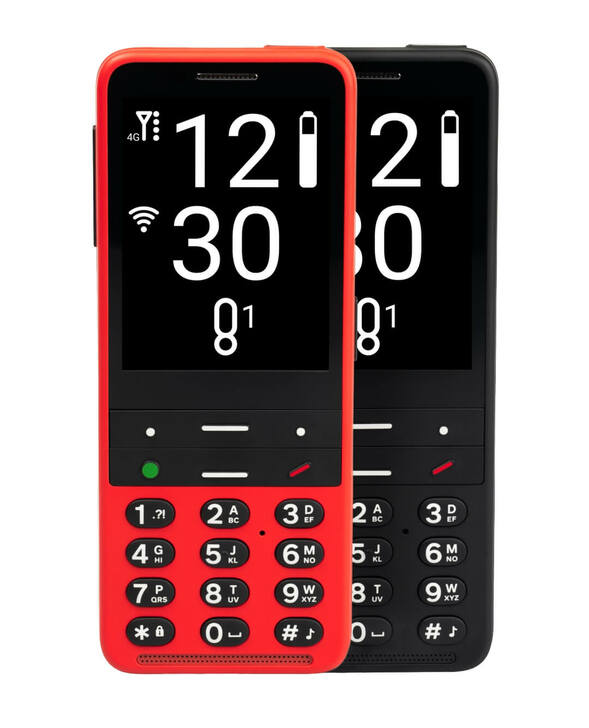 By IT Trainer Daniel Dunne

Following on from their hugely successful Original BlindShell Classic phone the Czech company BlindShell have just released their Classic 2 model. This newer model is a complete redesign of the physical phone from the ground up but retains a very similar software interface that users have grown to love.

Firstly, focusing in on the hardware re-designs there are notable differences which users we feel will consider good improvements. The look and feel of the fondly remembered Nokia design evident in the original BlindShell Classic is largely retired in favour of a newer layout that might remind one of a Panasonic phone from the early noughties.

It’s a solid build of a phone with a thicker dimension to accommodate a larger battery and some new technology. For us, one of the important changes is the charging port – an upgrade from micro-USB- to the more universal USB-C is a fantastic upgrade because it is now far easier to connect the charging cable without running the risk of damaging the port. USB-C allows you to connect either way round, so no more trying to guess the correct way to line up the charging tip of the cable!

The second physical change to the phone is the layout of the physical buttons and the addition of side buttons to the device. Gone is the central navigation pad and this has been replaced with single solid tactile buttons that are a boon for those of us with let’s say bigger thumbs! The volume keys are moved to the left side of the phone while down the right side there is a single programmable button that can launch your favourite app or long-pressed to activate the familiar voice-control feature.

The top-left action button brings you a newly added notifications centre which highlights messages received, missed calls, current date and time, battery status, Wi-Fi/4G status, Battery level and Bluetooth status. The top-right action button is another dot-shaped button placed on the right in the first row of keypad buttons. Press to repeat the last utterance. Long press to spell the last utterance. On the previous BlindShell Classic these were the volume up and down keys.

Finally, it’s worth mentioning that BlindShell have retained the 3.5mm headphone jack, the SOS rear button and have added an LED flashlight to the top of the phone. They also have added NFC which is a technology used to communicate with tag objects – NFC stickers which can be used on objects to identify them with an audio pre-recording. In addition, BlindShell have introduced new tile tags called beepers (similar to the Apple AirTags) and right now BlindShell are giving a free beeper with new phones purchased until the end of the year. These beepers are useful for attaching to objects, like say a set of keys or a rucksack for assistance in locating the items.

So, after that whistle-stop tour of the hardware or physical changes and additions to the BlindShell Classic 2 over the original model, we now look at the software – basically what happens when you power on the phone and use it. The software is by-and-large quite similar and familiar to the original model which is good for folks who like to upgrade to the latest models as they get released.

One slight change though is the new home screen, instead of being brought to the first item on the menu (Call) you are presented with a large time display, a Wi-Fi indicator, and a battery indicator. From there though, you use one of the up/down keys to enter the menu that is familiar to the users of the original BlindShell. You will notice that the announcements too are louder, and this is owing to a larger speaker in the phone.

Additions to the software of the phone include internet browser, vision aids (for working with beepers), magnifier, NFC sticker tags and App Catalogue (search for, find and download/update new Apps). WhatsApp, Facebook Messenger, and Telegram are highly popular apps are available here. BlindShell have committed to adding new apps, so keep a check in here for new cool stuff.

One of the most important aspects of a phone is call quality – we sometimes tend to forget that a phone is actually used for: phone calls! The quality of calls is improved with clearer audio and also it has the ability for the device to link by Bluetooth to hearing aids, headphones, speakers and so forth… As the phone is shipped SIM card free – this means you can pop in a SIM from any of the Irish mobile carriers to get up and running.

Overall, we conclude that the BlindShell Classic II is a very good device with good improvements over its predecessor. Is it worth the upgrade though? Well for some folks it might be worth the purchase if you really want to get object tagging and locating, Web Browsing, WhatsApp and Facebook Messenger on a phone that still has physical buttons. However, if you’re more just into calls and texts, the original BlindShell Classic should continue to serve as an equally good device for some time yet to come.

To purchase a BlindShell 2 phone or to arrange a demonstration please email labs@ncbi.ie or call 1850 92 30 60. You can also visit the NCBI Online Store.