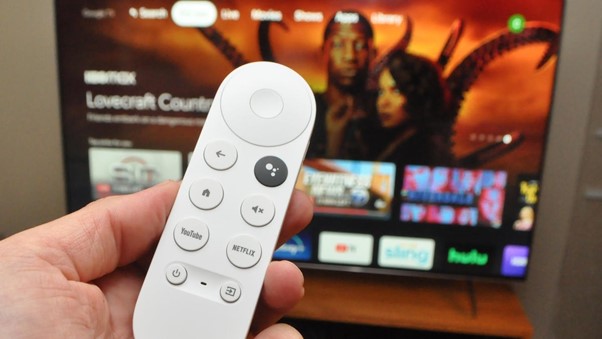 In the latest of our Technology Product Reviews, Joe Lonergan in the NCBI Labs team provides us with an insight into the Chromecast with Google TV, a streaming stick that congregates all your streamable content into one place.

Chromecast is a line of digital media players developed by Google. The latest model, called Chromecast with Google TV, was released in September 2020 and is the first in the product line to feature an interactive user interface with TalkBack screen reader and a voice remote. It comes in the form of a dongle that plugs into an HDMI port on a TV, which can stream content from the device onto the big screen. You can also cast from your phone, tab-let, or computer to the Chromecast.

I really liked this device as it was relatively easy to setup. It was similar to setting up a smart speaker as I had to use the Google home app on my smart phone. Once the device was plugged in, it appeared automatically on the home screen of the google home app and I was prompted through setup until all steps were completed. Once the device was set up, I was able to turn on TalkBack with a shortcut on the remote by pressing the down arrow and the back button together. I was really pleased when I pressed the arrow buttons on the remote and I could hear the menus been read back to me. I also had the option to use the google assistant button on the remote to launch apps such as Netflix, Disney Plus, and You tube. I could say something like “play The Crown on Netflix” Then press the select button and the series will play.

After a few days I got really comfortable using the remote and once I was signed into all my favourite streaming services, I found using the device was easy and a natural experience. Using the on-screen keyboard to type in usernames and passwords was cumbersome but I got around this by connecting a qwerty Bluetooth keyboard to the device and I was then able to type in passwords with more success. Thankfully typing in passwords into your streaming apps is a once off experience.

Yes, it is fully accessible.

I like how easy it is to use. Also, it has a TalkBack screen reader. There is also low vision solutions available in the accessibility settings to make text bigger and there is a high contrast mode.

There are many streaming apps available to link to the Chromecast with Google TV such as Netflix, Disney Plus, Apple TV, Amazon Prime, and you tube to mention a few.

I really liked that there is an assistant button on the remote as this made it easy to launch programs and apps with a voice command. The remote also has dedicated Netflix and you tube buttons.

It turned my old TV into a smart TV, for a reasonable price.

It is hard to find a negative about the Chromecast with Google TV but if I had one gripe it would be the remote is quite small and gets lost easily. Replacement remotes can be bought separately.

You can also control the device using the remote inside the google home app on a smart phone, but this is not as easy to use.

It exceeded my expectations.

The TalkBack screen reader is good, but it always could be improved by making the voice more customisable. The remote could have a built-in solution to help you find it when it gets lost similar to the find my app on apple devices.

Yes, I tried the Apple TV. It is also a very good streaming device with many unique features, but it is more expensive and may not suit non-Apple users.