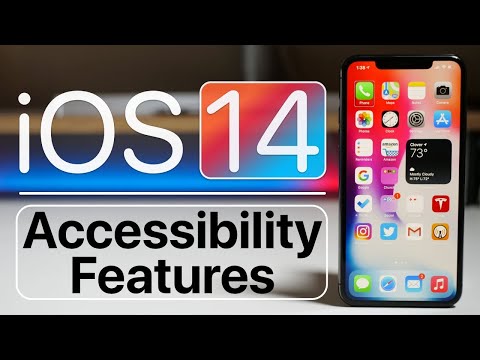 Every year, Apple rolls out a major update to the iOS software that runs on all iPhones. The newest version is iOS 14 and it became available to download on Wednesday 16th September.

The update includes a variety of new features, including widgets on the Home screen, an all-new App Library, and much more. Many new accessibility features and enhancements are set to benefit users who are blind or have low vision, expanding on Apple’s efforts over the years to make its devices and software more accessible. Here’s a rundown through some of the highlights.

Changes to the Home Screen

An iPhone’s Home screen looks very different in iOS 14, and offers far more potential for customisation. For starters, Apple allows widgets to be added to the main Home screen and right alongside your apps. Home screen widgets are large, dynamic “icons” that display live app data like the weather, the news headlines, or your daily step count. There is a new “widget gallery” where you can add and customise widgets. There is also a new “Smart Stack” widget that automatically shows relevant apps based on the time of day.

Apple has introduced an App Library in iOS 14 that offers a new and efficient way of organising your apps. Instead of scrolling through multiple pages, you can now access a single view that automatically arranges your apps according to smart categories such as Entertainment, Health & Fitness, Social, Productivity and Finance.

You can also scroll through all your installed apps listed in alphabetical order or use the search box at the top of the list to find one. It’s a great way to clean up your iPhone’s home screen.

VoiceOver, Apple’s technology that translates on-screen text into speech, received an exciting update in iOS 14 in the form of VoiceOver Recognition. With this feature you can get descriptions of images and screen elements even on webpages and in apps without accessibility information. VoiceOver Recognition offers the following features:

Your iPhone will speak descriptions of images in apps and on the web.

Your iPhone will speak descriptions of text found in images.

Your iPhone will automatically make apps more accessible by recognising items on the screen.

Improved Magnifier gets its own App Icon

The Magnifier feature on the iPhone, which is designed for people with low vision, has new capabilities in iOS 14. For starters, Magnifier features an updated interface that makes controls more easily available and offers greater clarity on what each tool does. There are options for adjusting brightness and contrast or adding a filter to change what’s being magnified to a colour that’s easier for an individual to see. It is possible to rearrange all of the controls to best meet a user’s needs and customise the filter options so you can set the one that you need and toggle it on with a tap.

Magnifier also features a new multi-shot option allowing users to take multiple photos at one time. This could be helpful when, for example, capturing different pages of a menu and then reviewing them all at once, rather than having to take single shots that need to be reviewed one by one.

For frequent Magnifier users, it’s now possible to add an app icon to the Home Screen to activate the Magnifier function. This can be done by accessing the App Library, searching for Magnifier, and then dragging it over to one of the app pages or long pressing and choosing “Add to Home Screen.”

Back Tap was designed with accessibility in mind but offers a huge amount of convenience to everyone. With Back Tap, you can perform various actions by a double or triple tap on the back of your iPhone. These include launching many of the system actions like opening the app switcher or Control Center, as well as accessibility features like enabling Magnifier or VoiceOver, performing gestures, and even launching Shortcuts.

You do need an iPhone that can support the feature, which is all phones from the iPhone 8 onwards. Most people that invest in an iPhone like to keep it safe by using a case so they will be glad to know this feature still works even when your iPhone is in the protective case.

To set up Back Tap, go to Settings > Accessibility > Touch > Back Tap. Now choose either Double Tap or Triple Tap. Whichever you pick, you get the same list of options.

One handy use for Back Tap for low vision users is the ability to put the Magnifier on double back tap. As Magnifier has also improved in iOS14, you might find yourself using it a lot more and this is a really easy way to launch it. You can set your triple back tap to the flashlight.

Other Notable Features in iOS 14

In iOS 14, Apple cut down the Siri interface so that it no longer takes over the whole of your iPhone’s screen when you issue a voice command or query. Instead, a small ‌Siri‌ orb pops up at the bottom of the screen without obscuring what’s being displayed.

What’s more, you can use Siri to record and send audio messages to contacts. This includes Android and iPhone users. To do this you need to first summon Siri on your iPhone, then say “Send an audio message to [contact’s name]”.

iOS 14 lets you change the default email and web browser apps on the iPhone for the first time. This is a long-requested feature, as iOS 13 and prior versions of the operating system will always direct taps on links to Safari, and new emails start in Apple Mail. To change the default iPhone email and browser app you will need to go to Settings, scroll down to the third-party app you’d like to set as default, choose Default Browser app or Default Email app, then tap on the third party app you’d like to use.

Accessibility has long played an integral role in Apple’s major iOS releases, and things are no different in iOS 14. With the ability of VoiceOver to recognise and describe unlabelled elements in apps and websites, a redesigned Magnifier, a new Back Tap gesture, as well as other notable enhancements, blind and vision impaired iPhone users have much to look forward to.