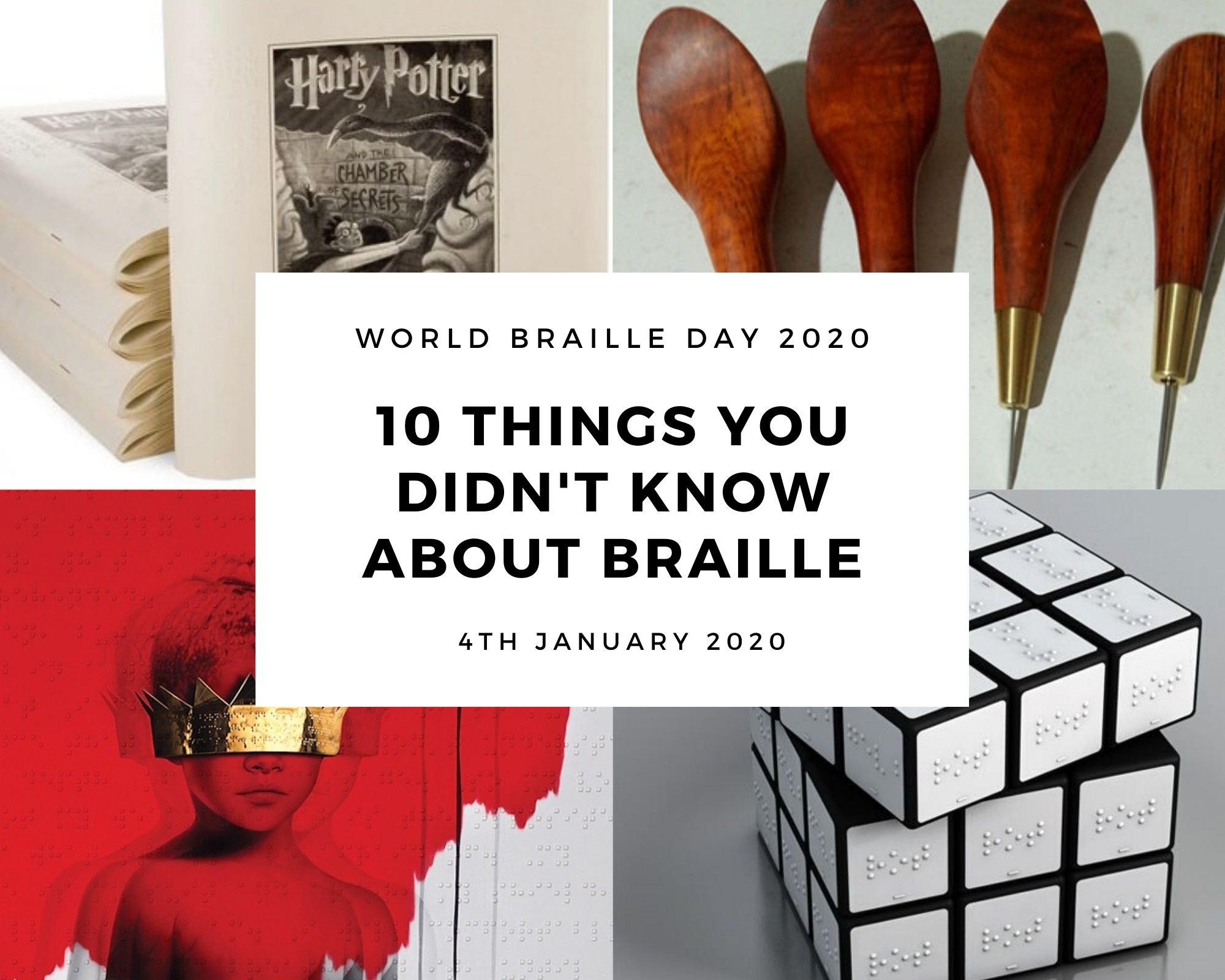 In celebration of World Braille Day 2020, we have put together some interesting facts about Braille, from its origins to its use in popular culture Braille is all around us.

1.Braille started as military code. Origins of Braille come from the French army in 1819. Soldiers created a military code called ‘night writing’ so they could communicate in darkness without speaking. As a young boy, Louis Braille learned about ‘night writing’ and at the age of 15 developed a more usable and streamlined version of the Braille alphabet as the military code was too complicated.

2. Braille was initially written with the same tool that blinded its inventor. Louis Braille’s father was a leatherer, and a young Louis would play in his father’s workshop. Aged three, he was trying to make holes in leather with an awl, but it slipped and struck him in the eye. The injury, agony and subsequent infection meant he was completely blind by the age of five. As a teenager, when he was developing his raised-dot system, he used another awl to create the indents in the paper

4. Braille is more widely used in popular culture than you think. Rihanna is a fan of Braille. The cover for her single “FourFiveSeconds” (with Kanye West and Paul McCartney) spells out the

song title in Braille, and her 2016 album “Anti” features a poem written in Braille

5. There’s an asteroid named Braille. In 1999, NASA’s Deep Space 1 probe flew past an asteroid while on its way to photograph the Borrelly comet. NASA named the asteroid “9969 Braille” in honour of Louis Braille.

6. Braille takes up more space than the traditional alphabet, so braille books are much larger than their print counterparts. “Harry Potter and the Goblet of Fire” is ten volumes in Braille, and “Webster’s Unabridged Dictionary” is 72 volumes.

7. There are 180 different letter contractions, and 75 short form words used in English contracted Braille. These short cuts reduce the volume of paper needed for reproducing books in Braille and make reading faster.

8. Braille wasn’t the first writing system for the visually impaired. Braille is the most common and popular system in use today, however, other systems predate it – and the inventor of Braille was aware of at least some of them.Precursors to Braille also used embossed type – the imprint of the letters were raised off the page. Louis Braille (who invented Braille) learnt to read with an embossed type system created by Valentin Haüy because he studied at Haüy’s school (one of the first schools for blind children). But Haüy’s system was expensive to produce, and although children could read, there was no hope of writing something themselves.

9. Braille Is not Universal

It may come as a surprise that there are different braille systems for different languages. In fact, there is a braille language for many of the languages spoken today. While the move toward braille uniformity, known as Unified English Braille (UEB), has led to many correspondences between the alphabets, the languages themselves are still distinct and unique.

10. The World Braille Union (WBU) has worked with the World Intellectual Property Organization (WIPO). Together with other concerned organisations, the Marrakesh Treaty was created to remove barriers of intellectual property being translated into Braille. The Marrakesh Treaty was adopted by the WIPO in 2013. In 2019 NCBI launched the Bookshare platform, which is the most extensive accessible digital library in the country, available for all people with print disabilities. Bookshare makes reading easy with all titles available in a format to suit your needs including Braille. Find out more on www.bookshare.ie.