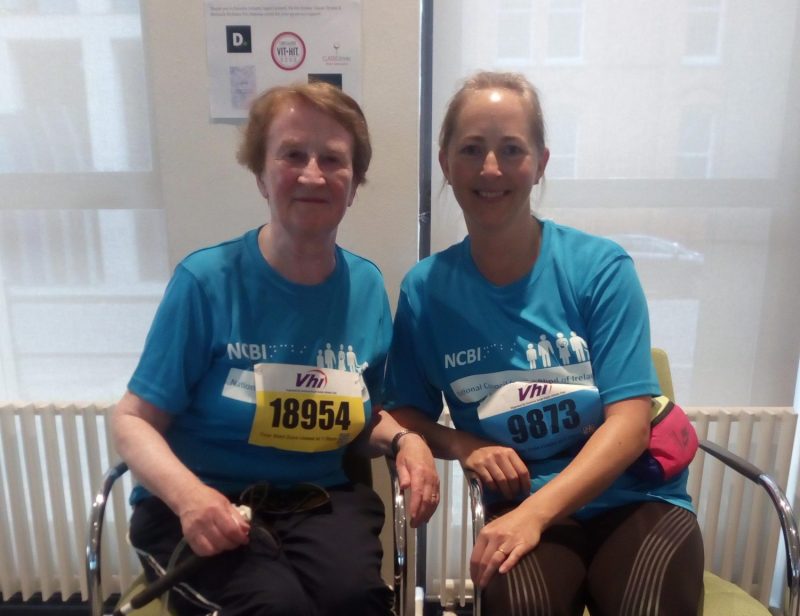 Have you ever considered being a guide for a person who is blind or vision impaired? Emma tells us about her experience guiding Sr. Brid Smith at this year’s Vhi Women’s Mini Marathon.

Emma’s last Mini Marathon was 17 years ago so she knew it was going to be a challenge. She says “I received an email from Collette in NCBI asking if I was interested in assisting a woman who is partially sighted woman for the Women’s Mini Marathon and I said ‘why not!’ I registered for the charity NCBI by chance and I thought that guiding was meant for me.”

Emma describes how the day panned out “I felt a bit nervous to say the least, as I waved goodbye to my friends who were also doing the marathon. Off I went to the NCBI hub for the day, where there was a fantastic spread of food and drinks laid out. I introduced myself to Collette and soon my companion was by my side. Having completed several mini marathons before, I realised what a daunting experience my companion would have, with 40,000 women crowding the streets of Dublin.”

“I felt blessed to have my eyesight and appreciated all that was around me. I’m not too shy at talking, I probably burnt the ears of her and she probably was saying to herself- is she ever going to shut up! I explained every little detail as we were going around, from describing the funny outfits the men wore to what was on everyone’s t shirts and the fancy houses and cars that we passed. She even enjoyed when we were hosed down by the Dublin fire service. We worked together as a team and guiding was a wonderful experience- for us both. We safely went back to NCBI’s base camp, we had tea and sandwiches before I dashed off to get my bus back home.”